Dedicated to making a difference in children’s lives, Daniels’ passion and vision led her to create in 2002 the month-long Festival of Children, which showcases more than 70 youth-serving, nonprofit organizations and focuses on community, creative, educational, and personal enrichment for both children and families.

In 2003, with the launch of the Festival of Children Foundation, Daniels, working with local, state and federal authorities, was instrumental in having September designated as National Child Awareness Month (NCAM) to heighten child awareness issues throughout the nation. Daniels has also devoted her time in leadership positions with Segerstrom Center for the Arts, as the board’s vice-chair of support groups from 1999 to 2012; Children’s Hospital of Orange County, as CHOC Follies co-chair since 2001, and co-chair of CHOC’s $125 million capital campaign to support construction of its Tower, plus a recent $5 million gift to establish the Children’s Mental Health Center; Orange County School of the Arts, as co-chair and $2 million donor to the $16 million Masterpiece in the Making Campaign; and Pacific Symphony, with support of its Classics Series and Principal Pops Chair, plus funding for community concerts at affordable prices.

Community outreach has been a longtime passion for Donnie Crevier, former owner of Crevier BMW and Crevier MINI, who continues his ownership of the Crevier Sales and Leasing Company and Crevier Classic Cars Company.

Crevier’s 20-year support of the Boys and Girls Club of Laguna Beach has included co-chairing the club’s capital campaign for the development and construction of a new facility. He also founded, and is actively involved in, the Earning for Learning Program at the Santa Ana-based Pio Pico Elementary School.

“I was a handful as a kid, and I’m not sure how things would have worked out for me without the Boys & Girls Club in my life. As to my giving philosophy, if you’ve had a little luck along the way, I think it’s nice to try and help others, as you may have been helped.” Donnie Crevier

FedEx recognizes that its impact is greater than the services it provides and is committed to being a great place to work, a thoughtful steward of the environment and a caring citizen in the communities where its workers live and work.

More importantly, it is committed to building strong local communities through involvement from its employee-supported FedEx Cares program. FedEx Cares supports the National Multiple Sclerosis Society’s Bike MS, the premiere fundraising cycling series in the nation, with a choice of 100 rides nationwide.

The Pacific South Coast Chapter has supported Bike MS since 2004, with more than 2,000 cyclists and hundreds of volunteers participating annually, riding from Irvine to San Diego–up to 150 miles over two days–and raising more than $2.3 million dollars annually for MS programs, services and research. The local team, led by team captain John Hinckley, has contributed nearly $165,000 in 12 years, sponsors a rest stop on the ride and provides corporate donations, along with in-kind transportation. Each member is committed to raising $400, with many raising much more.

“I am proud to be a member of the FedEx Cares team and support NMSS. This will be my 12th year riding in Bike MS. My hope is that the dollars we raise will be the dollars that find the cure for this disease, and we can then enjoy a victory ride. Until then, I’ll keep pedaling!!” John Hinckley, FedEx Freight Managing Director, Operations

Working 33 years for the City of Anaheim in its Public Utilities Department and retiring as the Financial Planning Supervisor in 2006 did not deter James F. Amato from fundraising for his favorites charities.

Amato joined North County SERTOMA (acronym for Service to Mankind) in 1980 and is currently a member of the Brea club, where he serves as its secretary/treasurer. He is also a member of the National Development Committee for Sertoma Headquarters and was just elected treasurer of the Hearing Charities of America (part of the Sertoma family).

Amato has been named Sertoman of the Year nationally and been awarded the President’s Outstanding Achievement Award. In 1996, he became a member of the Speech and Language Development Center’s board, where he has served as treasurer and president and, again, currently as president. He has also served on its finance, development and governance committees. In 2007, Amato joined the board of the Center for Children Who Stutter, and has served as its treasurer for the past few years.

“As a nonprofit volunteer and fundraiser, I believe it is our duty to help keep our nonprofits financially sound. That requires fundraising. It can be uncomfortable for some people to ask others for money, but, as a member of a nonprofit, it is our duty. If you truly believe in what your organization does in your community, how can you not make ‘the ask’? This is the truest sense of giving back to the community.” James F. Amato

Rusty Kennedy is the Founding CEO in 1991 of the nonprofit Orange County Human Relations, whose mission has been to promote understanding among diverse residents and to eliminate prejudice, intolerance and discrimination.

“My parents taught me that we were given much, so we had an obligation to give back, so I devoted my life to creating a better world for all people, and this work gives me a great sense of fulfillment. I feel like I did what I could to make a difference for my children and for all children.” Rusty Kennedy

Of course, it’s the “much more” that truly sets HKA apart, as philanthropy is an authentic part of the agency’s DNA. Over the years, the award-winning agency has supported worthy causes ranging from health to the environment to human services. HKA provides pro bono support to select nonprofit clients, while other nonprofits receive a steeply discounted rate and significantly more time than budgets dictate.

HKA team members routinely go beyond the call of duty to ensure success. In the nonprofit realm, this means staffing evening and weekend events, connecting clients with causes, serving on boards, creating strategic marketing plans, and brainstorming ways to generate more funds and new supporters. At HKA, team members feel a sense of pride for the extra time they devote and its impact on others.

“Since our earliest years, HKA has been community-minded and philanthropic, and it’s personally rewarding for me to have led this business philosophy over three decades. I’m extremely proud of our HKA team and how our employees go the extra mile to give back. It is so meaningful to me and to all of us at HKA that our nonprofit friends recognize and appreciate our efforts and have made this award happen.” Hilary Kaye, founder and president of HKA, Inc. Marketing Communications.

KIA Motors America (KMA) believes that with pioneering spirit, passion and hard work, anything can be achieved and contribute to a better future for all. One of the company’s core values is “Globality,” which teaches one to strive to become a respected global corporate citizen and enhance the quality of life for people around the world.

KIA and its employees have supported a number of organizations nationally, as well as in Orange County, home to its corporate headquarters in Irvine. KIA’s Volunteer Impact Program (VIP) was launched in 2013, and it provides KIA team members with paid time off to volunteer with KIA’s charity partners in Orange County, as well as other locations in the U.S., where KIA has regional offices.

Projects include working in a food pantry, preparing interim homes for homeless families, beach clean-up, food and holiday gift drives, a literacy project for elementary school children, and helping to maintain the gardens and displays at a local organization that educates the community on sustainability.

“KIA Motors America is dedicated to giving back to our Orange County community through charitable donations and volunteerism. We are honored that KMA has been named Outstanding Mid-Size Business on National Philanthropy Day in Orange County.” Rhonda M. Bolton, Head of Corporate Diversity Initiatives, KMA

John M. Word III and Edward J. “Rusty” Brown, Jr. are co-founders of The Word & Brown Companies, which has revolutionized the health insurance industry with groundbreaking services and products and is recognized today as the nation’s leader in providing innovations that simplify and streamline an employer’s administration of health care programs.

Headquartered in Orange, the business is an expert in all aspects of individual and group benefits distribution and administration. With the success of the business, both owners are firmly committed to giving back and support nonprofits in the community that help the less fortunate. Since 1985, when Word & Brown was founded, the company’s owners and employees have supported a wide range of nonprofits and events serving those in need.

“We’ve enjoyed tremendous success since we opened our doors more than 30 years ago. We and all of our employees recognize one of our roles as business leaders is to support nonprofits in our community that are helping those who are less fortunate.” John Word, co-founder, The Word & Brown Companies

“Mission Hospital has always been dear to my heart. My son Eddie was hit by a car when he was six, and we almost lost him. The Mission Hospital Trauma Center staff saved his life.” Rusty Brown, co-founder, The Word & Brown Companies 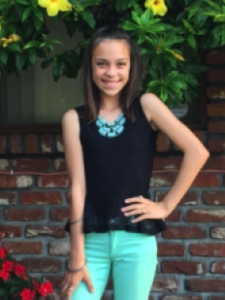 Anika Oritz was 11 years old when she launched Anika’s Pink Closet at the Mariposa Women & Family Center in Orange in January of this year.

The pop-up fashion boutique came about because Anika’s sister was the victim of domestic violence and was murdered by her estranged husband in 2011, and Anika wanted to honor her memory and spread the word about domestic violence.

Ortiz, a fashionista at heart, is a seventh grader at El Sol Academy in Santa Ana, and is in charge of every detail for the boutique sale each month, from collecting the items, both used and new, to marketing and managing the funds raised from each pop-up event. The sale items are clothing, accessories, toys and other goods – all for girls.

“I think it’s important for girls to learn what I’m teaching at a young age because girls of my generation need to learn the importance of self-worth.”
Anika Ortiz

Collapse
Nominated By: The Wooden Floor